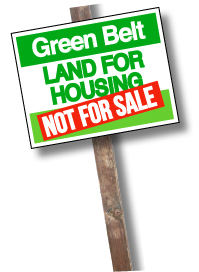 Conservative Dartford says neighbouring councils should follow its lead and plan for growth WITHOUT  a threat to the Green Belt.

Dartford’s Conservative Council has urged two neighbouring councils to ‘step back from the brink and think again’ before allowing huge housing schemes on Green Belt land.
Sevenoaks District Council has held a series of public consultations on proposals to allow up to 800 homes near Hartley, whilst Gravesham Borough Council says 2,000 homes may need to be built on Green Belt to meet housing targets. But Dartford Council is advising both neighbouring councils to follow its lead and plan for growth  WITHOUT harming the countryside.

It’s not surprising that plans to build up to 800 homes near the village of Hartley and hundreds more on Green Belt land close to Istead Rise in Gravesham have prompted huge public anger.

The proposals are in stark contrast to Dartford Council’s policy which offers protection to the Green Belt in future growth plans. Dartford’s Conservative Council has strongly objected to the proposals, sparking a lively exchange of views in the local press between Dartford Council Leader Jeremy Kite and his Gravesham counterpart. Jeremy said

“I obviously value collaboration with councils like Gravesham but the truth is that allowing development to consume Green Belt and erode the countryside would be both short-sighted and wrong. Dartford has adopted robust policies to safeguard the Green Belt and focus instead on growing town centres and urban areas. It’s important that other local councils do the same. There is still an opportunity for them to step back from the brink and think again.”

At the heart of the debate is the need for every local authority to demonstrate that it has identified sufficient housing sites to meet future demand.  Failing to do so means developers are far more likely to win appeals against council refusals to build on inappropriate green belt and greenfield locations.

To prevent that, Dartford’s Conservative Council has taken some big, bold decisions to set out where it believes larger developments to be acceptable and where it does not.

As a result, Dartford has a plan to meet demand for new housing in urban and town centre locations without encroaching on the Green Belt or countryside.

The policy offers strong protection to a string of villages and communities around Dartford where the local character is marked by its proximity to countryside or heathland.

Dartford’s planning chairman Derek Hunnisett, is realistic about the effort councils need to make to defend the Green Belt but says Conservative Dartford knows it was worth it. “No-one is saying that defending the countryside is easy but we’ve shown it CAN be done. We make a point of controlling growth rather than let it control us and we don’t let developers dictate the terms.”
“Of course, No two towns are the same but we’re all here to represent people, not do the  bidding of developers.”

Make no mistake, if green belt is lost, it is lost forever.

Local borough and parish councillors Steve Brown, Jeremy Kite and Roger Perfitt explain why Conservative Dartford is different from other councils and won’t be developing on the green belt any time soon.

It’s not uncommon for big developers to approach Dartford Borough Council to suggest they’ve found a site in the green belt that would be a wonderful spot for a a new village or hundred of homes.

These approaches all have one thing in common … We reject them.

The reason we’re in a strong position to do that is because Dartford is one of those councils that’s taken a big, bold decision to identify future housing WITHOUT resorting to spoiling the Green Belt or countryside.

Our policy is crucial because if a council fails to identify enough new housing sites it has almost no defence against planning appeals. We do. Of course, most developers would love to build in leafy locations where property values are higher, but here in Dartford we believe that WE should control growth, not let growth control US. Sadly, some other councils now seem to be struggling to contain the potential loss of Green Belt land.

Of course, no two towns are the same and we’re not saying the decisions we’ve taken were easy, but as more and more councils are faced with development in the Green Belt it’s pretty clear that our policy is the right one.

In a free society we can’t stop developers suggesting potential development sites – even if they are wholly against our policy and never going to be acceptable – and we know it always causes local concern when they do.
People naturally worry when we have to publish developers’ proposals but rest assured, our policies are transparent and robust. We’ve identified sufficient housing sites in urban areas to meet future housing need.

Not all councils are the same, and Dartford protects the countryside like few others.